From the exhibition IMPRESSIONS OF BOHEMIA

Historically, Bohemia has referred to the land and people that inhabit what is now the Czech Republic, but the term first rose to prominence in the English language in the 19th century to describe the unconventional lifestyles of impoverished artists, writers, journalists, musicians, and actors in European and American cities. Bohemian became synonymous in American culture with journalists, and, with the outbreak of the Civil War (1861-1865), specifically war correspondents. In 1861, San Francisco journalist Bret Harte began writing as “The Bohemian,” and San Francisco became known as the “Bohemia of the West.” In 1872, when a group of San Francisco journalists and artists who gathered regularly were searching for a name, bohemian was the top contender, and so The Bohemian Club was born.

When the earthquake of 1906 decimated San Francisco, much of the artistic community fled the city. Many of them came to the Monterey Peninsula, which since the late nineteenth century had attracted artists of all types who were eager to capture the essence of the dramatic shoreline. The area comprises the cities of Monterey, Carmel, and Pacific Grove, as well as Point Lobos and parts of Big Sur, which is considered the longest and most scenic stretch of coastline in the contiguous United States. Founded in 1770, Monterey was the capital of California under both Spanish and Mexican rule. The first U.S. flag raised in the new state of California was in Monterey. It was home to the first theater, first library, first public school, and first newspaper in California, as well as being a major port and supporting a strong fishing industry until the 1950s. Carmel was founded in 1902 and has come to be known as an artistic community, home to many who embraced the unconventional Bohemian lifestyle. Following the 1906 San Francisco earthquake, writers, musicians, painters, and other artists who fled to Carmel were offered home lots for $10 down with little to no interest and whatever they could pay monthly. With this mass migration, Bohemia had shifted approximately 120 miles south from San Francisco to the Monterey Peninsula.

The portfolio Impressions of Bohemia was conceived by the artist Jack Coughlin as a way to feature literary figures and photographers who resided in the Monterey-Carmel-Big Sur area at some point in their lives. The subjects of the etchings on exhibition, which will be introduced in FAM's social media and on this page weekly starting in mid-July 2020, may include and of the following: Ansel Adams, Gertrude Atherton, Mary Austin, Robinson Jeffers, Sinclair Lewis, Lincoln Steffens, John Steinbeck, George Sterling, Robert Louis Stevenson, and Edward Weston.

When was the last time you heard of $10 for an ocean view?

Following the 1906 San Francisco earthquake, writers, musicians, painters, and other artists who fled to Carmel were offered home lots for $10 down with little to no interest and whatever they could pay monthly. Mary Austin was one of the writers who ended up there. In her autobiography, Earth Horizon, Austin described Carmel as “nothing but a farm or two, one or two graceless buildings and the wild beach and the sunny dunes....” 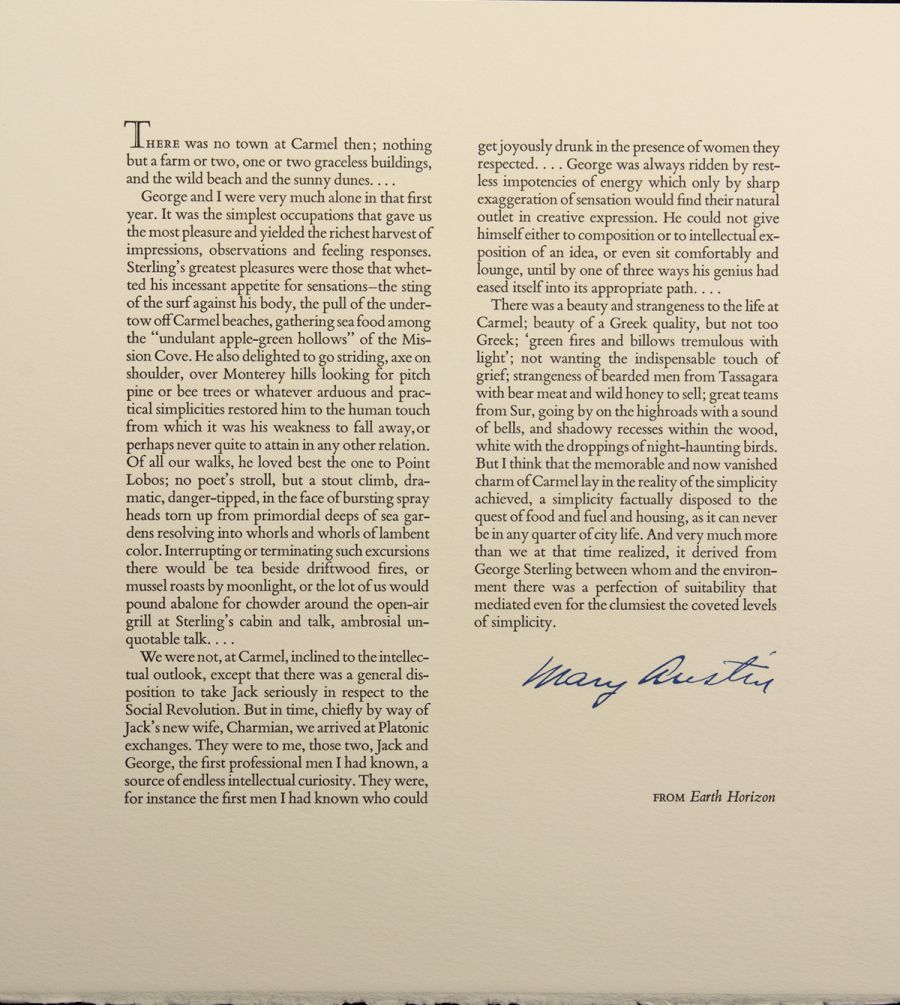