Due to the unknown status of the COVID-19 pandemic, this schedule may be subject to change. 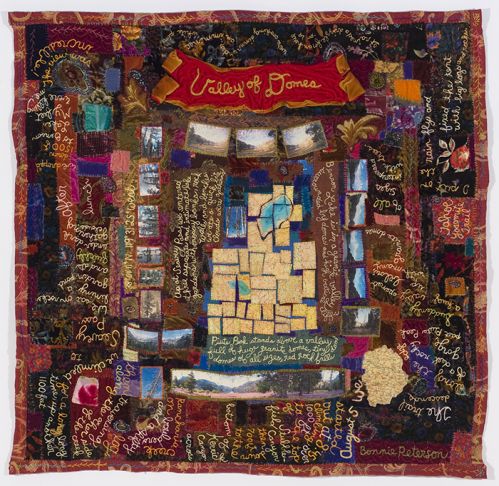 Another Glorious Sierra Day is an exhibition of narrative art about geography and science in the Sierra Nevada. Artist Bonnie Peterson mixes embroidery with a variety of source materials such as scientific data and early explorers’ journals. Wilderness experiences inform her work. Peterson grew up in the Midwest but has been backpacking in the Sierras since the 1980s. In 1997, she participated in an artist residency at Yosemite. Her selection of textiles and maps integrate the geographic features of the Sierras with 19th and 20th-century exploration and contemporary wildness encounters. Using rich fabrics and intricate stitching, her work provides a unique opportunity to create interest in further research on the Sierra environment and geography.

Here She Stands: Women Artists from the Permanent Collection 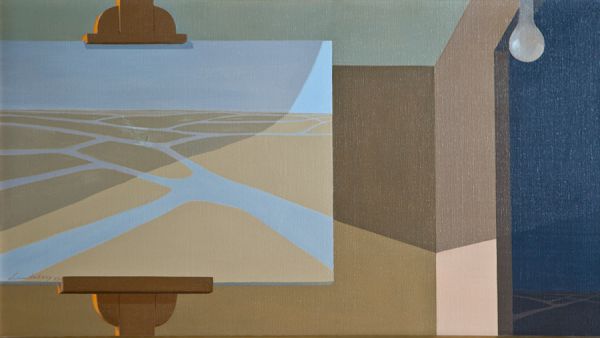 The year 2020 is a significant year in women’s history as it marks the centennial of women’s suffrage in the United States. As an homage to the audacity and perseverance of early American women, the Fresno Art Museum presents the exhibition Here She Stands: Women Artists from the Permanent Collection. This exhibition highlights a selection of the phenomenal and groundbreaking work by women artists that the Fresno Art Museum holds in its permanent collection. Throughout history, women artists have been overlooked and excluded from the narrative. In 1971, art historian Linda Nochlin wrote an article for ARTnews titled “Why Have There Been No Great Woman Artists?” Her argument wasn’t that there were no talented women artists but that systematic social, cultural, and political barriers prevented many women from participating and succeeding in the art world. In the forty-nine years since that article was published, much discourse has been produced on the subject, yet the art world still has much further to go. The Fresno Art Museum has long been dedicated to the promotion of women artists. The first work by a woman artist in the Museum’s permanent collection was Jean Ray Laury’s Tiger Garden (1962), acquired in 1963 just after the Museum first began building its permanent collection. Judy Chicago brought attention to women artists when she launched the first feminist art program at California State University, Fresno in 1970. The Fresno Art Museum was the first museum in the United States to devote a full year of exhibitions (1986-87) exclusively to women artists, and this launched the annual Council of 100 Distinguished Woman Artist award and exhibition program that continues to this day. The works selected for this exhibition reflect the diversity, depth, and creative vision of the many women who are represented in the Museum’s permanent collection. Some of these artists are world-renowned; some are best known in the local community. The works were selected with an emphasis on pieces that have not been frequently exhibited. The selected artists include such names as Helen Lundeberg, Claire Falkenstein, Isobel Sanford, Amy Kasai, Jean Ray Laury, June Wayne, and Marguerite Stix.

There is a particular challenge to organizing a group exhibition for three stellar artists who are also related: in this case, a father, a mother, and their son, respectively Richard Amend, Susan Stinsmuehlen-Amend, and Wyatt Amend.

This exhibition is organized to highlight each individual artist rather than to focus on their similarities and familial influences on each other. However, it is apparent that they have inevitably been aware of each other’s work over the years as they all three work and live under the same roof that they call “The Amend Arts Compound.” Richard Amend’s giant black and white drawings alongside the two-dimensional studio glass by Susan Stinsmuehlen-Amend as well as the sculptural ceramics by Wyatt Amend provide a variety of mediums, surfaces, and constructions.

Susan Stinsmuehlen-Amend is a studio glass artist who has never blown glass. She explains, “I’m more about imagery and idea on the material.” Over the last decade, her work has primarily consisted of painting with vitreous enamels on transparent glass sheets. Susan’s works are in the permanent collections of LACMA, the Detroit Institute of the Arts, the Oakland Museum of California, and the Museum of Arts and Design in New York. In 1998, she was included in the California Glass Today group exhibition here at FAM.

Richard Amend is a painter and an equally capable drawer. His compelling black and white oversized drawings of peopled and unpeopled landscapes can be realistic or abstracted. A career in the film industry allowed him to travel widely, photographing sites for various cinematic projects. His paintings and drawings are begun from many of these photographs producing arresting and mysterious panoramic views of life. He has exhibited his work throughout California and abroad.

Wyatt Amend is a master ceramicist. Only in his thirties, his vessels and Propulsion Drones exemplify his finesse at the wheel and his command of clay and glazing compounds. Wyatt has developed new techniques to make his functional objects look like glass. His interdisciplinary process involves the use of a wheel, a lathe, and carving and grinding techniques typically used by woodworkers and cold glass artists. Although widely collected, this is his first museum exhibition.

From the Permanent Collection...

Born in Greenwich, Connecticut in 1932, Jack Coughlin studied at the Rhode Island School of Design and at The Arts Students League of New York. A printmaker, draughtsman, painter, and sculptor, Coughlin is best known for his portraits of literary figures. He is celebrated for his combination of traditional and innovative techniques during the resurgence of intaglio, lithographic, and woodcut printing in the 1960s and 1970s.

A member of the National Academy of Design, Coughlin’s works have been exhibited internationally and are in the collections of notable institutions such as New York’s Metropolitan Museum of Art and Museum of Modern Art. Coughlin is a Professor Emeritus at the University of Massachusetts Amherst where he taught in the Department of Art for more than 35 years.

The portfolio Impressions of Bohemia was conceived by the artist as a way to feature literary figures and photographers who at one point in their lives resided in the Monterey-Carmel-Big Sur area. The Monterey Peninsula is known as an artists’ haven and since the 19th century has attracted artists of all types who were eager to capture the essence of the dramatic shoreline. The subjects of the etchings are Ansel Adams, Gertrude Atherton, Mary Austin, Robinson Jeffers, Sinclair Lewis, Lincoln Steffens, John Steinbeck, George Sterling, Robert Louis Stevenson, and Edward Weston.

Explore some of the works from this exhibition. Click here to begin exploring!

It has been said that Will Bullas makes art fun! He is a master watercolorist with a sense of humor and wit that is often unexpected. He has award-winning artistic skills, and his creative works are unique and often full of whimsy.

The illustrations in this exhibition are somewhat of a departure from Bullas’ customary adult-centric humorous style full of visual puns and imaginative titles. In keeping with the theme of children’s book illustration art, the works shown are Bullas’ illustrations from an alphabet book written by David Domeniconi called M is for Masterpiece: An Art Alphabet. While the subject matter of the artwork in this exhibition is different than his usual fare, it shows off the creative talent of this artist through his unusual compositions that illustrate single art-related words or artist names from A to Z. The sophistication and detailed compositions should capture the attention of both young and old.

The McClatchy Fresno Arts Endowment
of
The James B. McClatchy Foundation