Tell Me a Story Artists 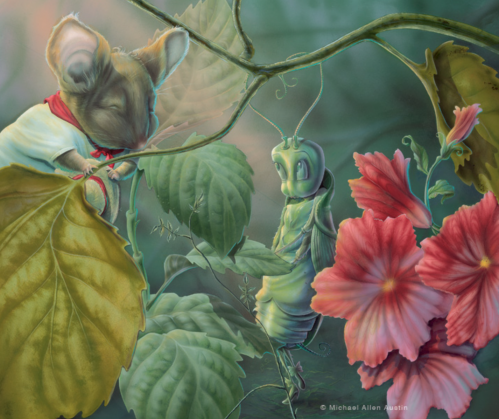 Michael grew up in an old Florida town running wild with local folklore that sparked his imagination. He says his big break came in the third grade when his teacher had the class write and illustrate stories daily. He started an art club in high school, and after initially enrolling in college to study medical technology, he switched to advertising and journalism. Today, he works as an illustrator and Creative Director for a small publishing house and lives with his wife and sheepdog outside Atlanta, Georgia.

Martina the Beautiful Cockroach doesn’t know coffee beans about love and marriage. That’s where her Cuban family comes in. While some of the Cucarachas offer her gifts to make her more attractive, only Abuela, her grandmother, gives her something really useful: un colsejo incredible (some shocking advice), and she asks: “You want me to do WHAT?”

At first, Martina is skeptical of her Abuela’s unorthodox suggestion, but when suitor after suitor fails the Coffee Test, she wonders if a little green cockroach can ever find true love. Soon, only the gardener Peréz, a tiny brown mouse, is left. But what will happen when Martina offers him café cubano? 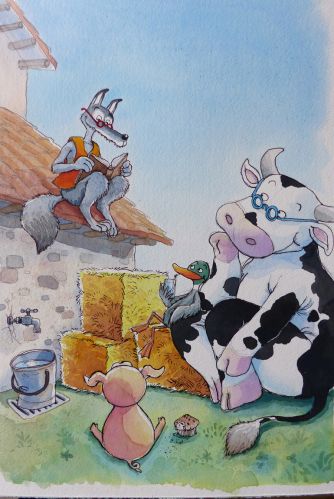 Pascal was born in Beaugency in the Loire Valley near Orléans in France. As a child, he created his own world in drawings. Pascal went on to study visual art in Blois, where he pursued a career in illustration art. His big break came in 1997 when his images were selected for exhibition in a competition held at the Bologna [Italy] Children’s Book Fair. That led to his being hired to create the images for Wolf! Soon after he moved to Paris and worked as an illustrator for several publishers. In 2004, Pascal moved to Montreal, Canada and now lives and works in rural Quebec as a freelance graphic designer and illustrator.

Once upon a time, a howling wolf leaped at a pig, a duck, and a cow and got no reaction. No running away, no frightened oinks or quacks or moos. “What’s wrong with you?” growled the wolf. “Can’t you see I’m a big and dangerous wolf?”

“I’m sure you are,” replied the pig. “But couldn’t you be big and dangerous somewhere else? We’re trying to read. This is a farm for educated animals….”
Educated animals? That gets the wolf thinking. Maybe he, too, could learn to read. And as the witty and winning tale reveals, an exciting new chapter in the wolf’s life begins!

Colin spent the first seven years of his life in Trinidad where he was inspired by the Caribbean island’s rich and diverse culture. When his family moved to New York, Colin embraced art as a means of escape from the pressures of adjusting to his new environment. His discovery of comic books was a life-changing experience that marked the beginning of his career as an artist. His talents allowed him to attend Fiorello H. La Guardia High School of Music & Art in New York City. Later, while studying at the School of Visual Arts, also in New York City, Colin was encouraged to pursue children’s book illustration because it allowed him the freedom to express himself through various media. His hope is that his work encourages young minds to embrace and follow their passions.

Louis needs to write an essay for school about young Abraham Lincoln. But it is 1951 Alabama, and African Americans cannot use the public library. Mama says one day soon they’ll be able to check out books, but Louis isn’t going to wait! When he makes a brave journey into the “whites-only” library, something surprising and wonderful happens.

This moving story and its rich paintings evoke the troubles and triumphs of days not long past. 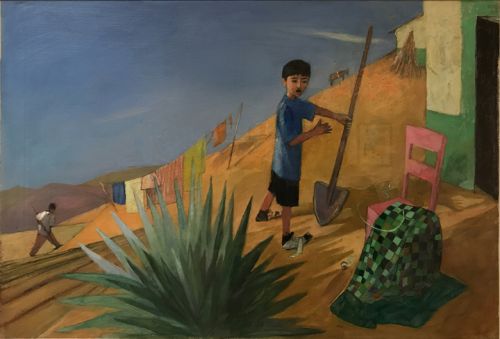 Perky grew up visiting ancient Italian murals in churches and villages throughout Italy with her art historian father. She believes that viewing such artworks helped her form an early model for personal narratives, thus story-telling art seemed a natural outgrowth of that early exposure. Perky earned a BFA from Boston University and an MFA from the Tyler School of Art at Temple University in Philadelphia. Perky's art has been inspired by her travels and extended stays everywhere from Oaxaca, Mexico (the inspiration for Bravo, Tavo!) to Sri Lanka. She currently teaches children’s book illustration, drawing, painting, and a mixed media figure class at the University of Pennsylvania in Philadelphia, and she continues to illustrate children's books as a freelance illustrator. Perky is married to sculptor and writer Brian Meunier who wrote Bravo, Tavo!

Young Gustavo loves basketball, but if he is to play, he needs new sneakers. But he has no money for sneakers. There is a drought in his Mexican village. So instead of playing, he must help his father, a dreamer and inventor, who believes that opening the ancient zanjas (irrigation ditches) can save everyone’s crops. While the rest of the town scoffs at their ideas, the two Gustavos clear the channels, and their corn grows green and tall. They are recognized for saving the town by following “the old ways.” Tavo’s old sneakers are transformed into something magical, so that when the basketball team takes the court, the cries of “Bravo, Tavo!” echo to the verdant hills. 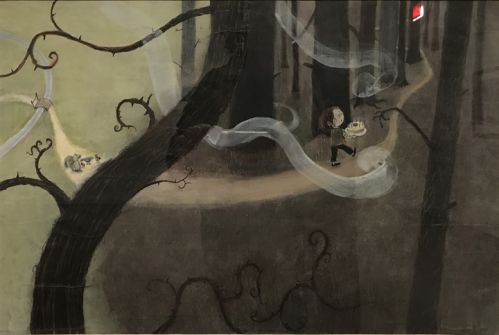 Brians’s first steps to becoming a children’s book illustrator started in third grade. He liked to draw pictures of his favorite comic book and cartoon characters. Around the fourth or fifth grade, he realized he could make other kids laugh with his drawings. Right out of the Paier College of Art in Hamden, Connecticut, Brian was hired by Hallmark Cards to work in their Humorous Department. After three years at Hallmark, he moved to New York City and did a variety of illustration work and worked on his portfolio of children’s book illustrations until he landed his first book illustration job nine years later.

What would you do if you were invited to the princess’ tenth birthday party but didn’t have money for a gift? Well, clever Jack decides to bake the princess a cake. Now he just has to get it to the castle in one piece. What could possibly go wrong? It all turns out that a gift far greater than the one Jack had originally planned to give is received with a lot of gratitude because it is something money can’t buy. 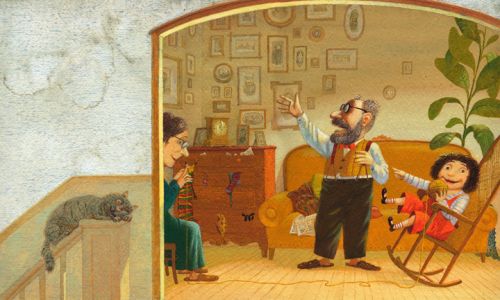 Boris was born in the former Soviet Union to an artistic family. When he was a boy, he decided that being an artist was not too bad an idea. He went on to study and graduated from The Institute of Theatre, Music and Cinema (now Russian State Institute for the Performing Arts) in St. Petersburg, Russia. After graduation, he worked as a set and costume designer in St. Petersburg. Five years later, in 1997, he immigrated to the United States working odd jobs before landing a position as an illustrator for the New York Times Book Review. This exposure was a launching pad for his work to be published in other publications and in children’s books. Boris lives and works as an illustrator in Brooklyn with his wife Yelena Romanova (who sometimes writes the books he illustrates) and their two sons.

The Castle on Hester Street
Written by Linda Heller

A flying goat, buttons the size of sleds, and a castle on Hester Street are some of the widely imaginative stories Julie’s grandpa tells her about his journey from Russia to New York many years ago. But Grandma’s no-nonsense memories are far different from Grandpa’s tall tales.

This classic story, which depicts the immigrant experience with wit and warmth, won the Sydney Taylor Book Award when it was originally published with author Linda Heller’s own illustrations. The 25th Anniversary Edition gives the story new life with Boris Kulikov’s vibrant paintings.